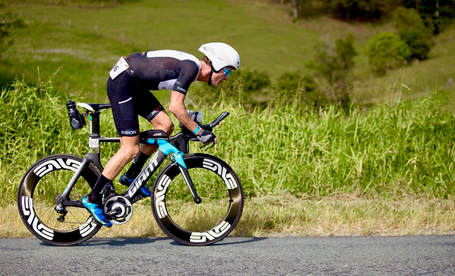 As a teenager I recall being mesmerised watching the Hawaiian Ironman on Wide World of Sports. As a junior, the intrigue of endurance sport initially led me into Multisport racing. The Subaru Winter Classic raced through the Victorian High Country captured my attention prior to venturing into triathlon proper. The race involved cross country skiing, cross country running (orienteering), riding and white water paddling. For many years I returned to the Subaru Series and similar races that dominated the Victorian Multisport calendar during the late 80’s and early 90’s.

I raced my first short course Triathlon in 1990 and soon developed a taste for Olympic distance and Long Course racing. By 1995 I had been lured away from Triathlon to cycling. I thrust myself into the Melbourne cycling scene with a focus on criterium and stage based road cycling. Whilst the thrill of road cycling persisted my passion for triathlon remained strong and in 2000 I qualified for and raced the Australian Ironman in Forster. Between 2001 and 2012 I again focused on cycling but dabbled in the odd marathon, ultramarathon and triathlon. When Melbourne took on the Asia Pacific Ironman Championship in 2012 an Ironman race on my doorstep was too good to refuse. I raced Melbourne Ironman in 2012 and 2015 where I qualified for Kona. I raced Kona in 2015 and fulfilled a life long dream.

In 2017 I completed Ultraman Australia drawing on 30 plus years of racing across the key disciplines and being surrounded by world class athletes, including Olympians and World Champions. My early years racing were self coached and littered with mixed results. More consistent and improved results came as I learnt the value of structured training laid out by a coach who could view my training more objectively than I ever could.

My key strength as a coach is a deep understanding of balancing the realities of family and work with the pursuit of athletic goals. I have decades of experience in shift-based emergency health care and raising three energetic children; Charlie, Hugo and Alice. My busy family, work and sporting schedule have long been supported by my ever-tolerant wife Emily.

A partnership with T:Zero as a development coach is the ideal opportunity for me to assist those who feel they would benefit from structured training to reach their goals.

It's time to
​live your potential

Enquire about getting your own T:Zero Coach and personalized training program . All coaching is done via correspondence/online so your location won't stop us!  Send us your details and one of our coaches will get in touch to discuss how we can help you live your potential.